An ongoing project for us that begin in early September is work with Swedish composer Jonathan Östlund. His debut work is due to premiere at Cadugon Hall on the 8th of October to an audience of over 900 people, and these recordings of his work will be released following this.

We’re very proud to have Jonathan and his wonderful team in, it’s a pleasure to hear the music being recorded. The project, “Lumières – the music of Jonathan Östlund” are a set of wonderful pieces for piano, flute and string quartet in various arrangement.

It’s been amazing to hear the piano given a full run out, and make the most of our live room and sound design.

Buy tickets here to hear them! 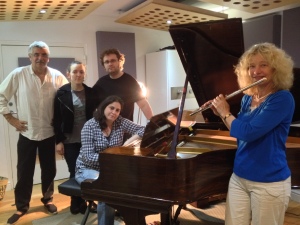 Jonathan Ostlund, centre, and his team at Greystoke Studio 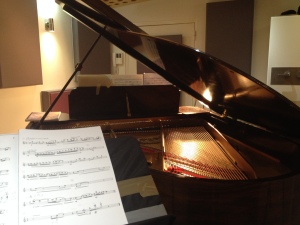 Piano set up at Greystoke Studio for Jonathan Ostlund

Semi finalist on BBC’s The Voice 2014, Bizzi Dixon and team came down to use our studio and have a play on our Hammond, Lesley and other vintage delights. Working towards completion of his album,  Bizzi brought down producer Nicky Brown (Madonna, Rick Astley, M People, Primal scream and others) and well known keys player and composer/arranger Peter Dayley (Paloma Faith and others).

It’s always lovely when our vintage instrument collections gets a a run out, and even better to hear them on exciing projects accompanying wonderful voices. Best of luck with your release, Bizzi.

London-based Label and artist management company Coast are developing artists Nela and Matina, and came to us to record new parts as well as re-producing two demos.

For Nela, a south London writer, this is her first major solo release, and for Matina, a Maltese native, this is her second solo release, the first reaching Number 2 in the Maltese charts. Previous career highlights include singing for  the Royal Family, and the Pope, at the Vatican.

The two tracks have been produced by Andy Whitmore.

You can find Nela and Matina here and here respectively.

Look out for the releases later this year. 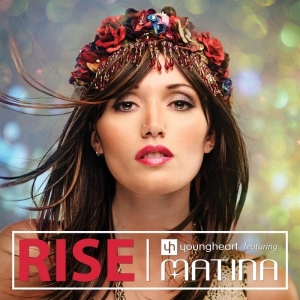 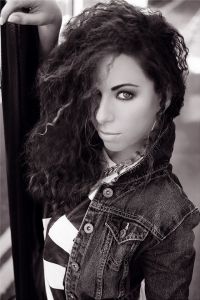