This autumn into spring has been one of our busiest times all year, even right up until Christmas, with some single day sessions as well as lots of new long term projects and productions. 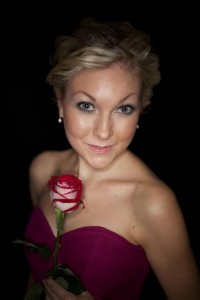 Christina Myacina International British coloratura soprano Christina Johnston Myacina splits her time between her native UK and home in Prague, alongside singing in opera houses and National Theatres across Europe. Her project with us comes as she’s announced she will be the featured soloist on the new Disney film soundtrack, Aldabra. Recently 3rd in the International Mozart competition – she’s rising in the operatic world and currently playing ‘Adele’ in Die Fledermaus. She’s been working with us on classical/contemporary traditional songs, including some beautiful violin and piano parts recorded at Greystoke. Find Christina here on http://www.christinajohnston.co.uk

Lena We’re writing and producing for up and coming Ukranian pop singer Lena, who’s currently studying at music college in London. A talented singer and artist in her own right, we’ll be working on this through until December as we finish her debut EP. 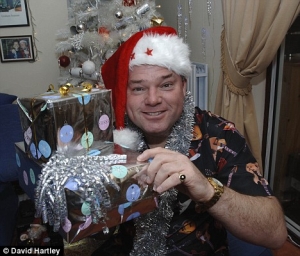 Andy Park in his usual setting…

Andy Park  – Mr Christmas We’ve had some festive fun writing and producing the newest single for Andy Park, aka Mr Christmas. Andy is famous for his love of all things Yule, celebrating Christmas every day. With features in national print and TV, we’re looking forward to hearing our work on the radio. You can see the very Christmassy video here http://www.youtube.com/watch?v=GLPkz9I5RNM

Fabio Bartoli Italian singer Fabio came in to record and co-write original tracks with our production team. Still an on-going project, we look forward to hearing the final product.

Ojjay Midlands based 20 year old pop/R&B singer Ojay came in for a studio vocal session whilst she’s developing her sound.

Chris Meredith We often work with writers helping to bring their ideas to life, and Chris brought us a song called ‘Soon It Will Be Morning’ that we’ve been producing and recording for him, as well as working on classical remixes. We also sourced one of our talented session singers for him to bring his song to life. 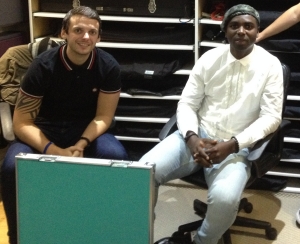 Jason and Harry from The Watch

The Watch Formed in 2010 during an army exercise in Salisbury, Jason Francis (lead vocals)  Harry Smith (guitarist) began writing songs whilst resting in the barracks. What seemed to have been fun initially to both soldiers, quickly turned into some salient-sounding music and soon they had built up an audience of army peers-soldiers and officers alike. A few months later they’d began work with Guy Barnes, had been played on their barrack radio station and turned from two serving soldiers into two recordable artists.  With the support of the MOD and charities like the Army Benevolent Fund and Help for Heroes, they have a strong and bright future. Their music is a fusion of reggae, rock, pop, funk and soul. With Andy, The Watch have been working on three tracks, recording live instruments alongside more produced elements. Below are some snapshots of the project, including session drummer Ed Williams. 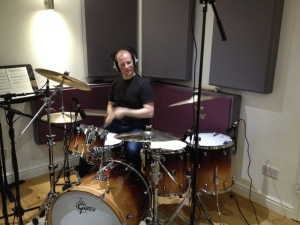 Ed recording drums for The Watch 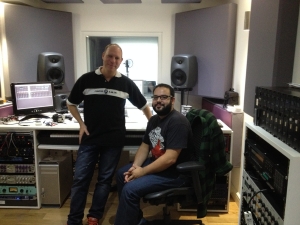 Darren Haines and Slava Zenin Long time friends and writing partners Darren and Slava from Portsmouth came with a demo they’d written to pitch to labels. Andy and engineer Matt helped them to freshen up their track, reproduced the entire song, re-recorded vocals, mixed and mastered it in three days. 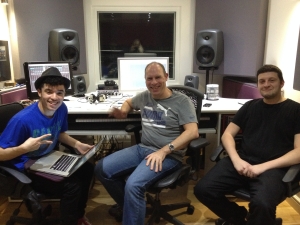 Johnny Bishop When he’s not professionally dancing on telly on a Saturday night for the X Factor, Prince/Miguel/MJ inspired Johnny writes and sings. We produced two of his tracks for him before Christmas, before he came back in 2014 to do two more, and they sound great if we do say so ourselves! Keep an ear out for this talented lad.

In the run up to Christmas we had a busy studio, with clients coming in to record musical Christmas gifts for loved ones, as well as beginning new projects that carried through into the New Year.

Fay Kendel joined us from Denmark to work on four of her self-penned R&B tracks, produced with Andy Whitmore, Nicholas Daniels and Matt Knight. Consuming countless cups of fruit tea and honey, the vocal powerhouse worked with our team over 10 sessions to produce four well-crafted tracks. We’re looking forward to hearing them out in the open, and wish the lovely Fay every success. See www.faykendel.com for all things Fay releated. 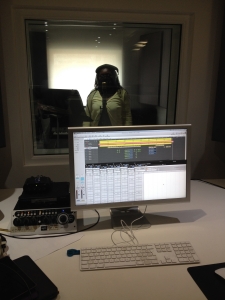 Fay Kendal in the booth, shot from the control room 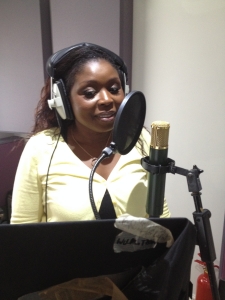 Fay Kendal in the booth at Greystoke Studio

Monique Backer Songwriter Monique joined us to work with our team to produce her song over a three-day session. Initially sending us a rough demo, we drafted in one of our brilliant session singers Rosie Pennie to cut the vocal on the pop track, and also re-produced the song to update it and bring it to release standard.  A pleasure to have in the studio and a highly productive few days, we hope to see Monique back with us in the studio in the future.

Serena Kern With thousands of Youtube views, appearances on BBC Radio London and a rising profile, the Indian-Swiss singer/songwriter is managing a burgeoning music career alongside being a practicing lawyer. Serena came to us with two demos she wanted to produce in a way that would combine her unique heritage with contemporary sounds. Working with Andy over four days, we think we managed just that! Check out www.serenakern.com to find out what she’s up to. 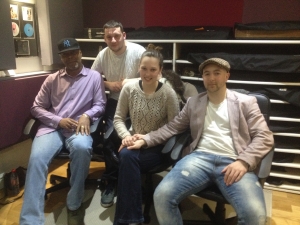 Song-writer Dominic Daniel came in with a song he’d written that we reproduced for him. It was a delicate balance as the song was 90% there, but the final 10% is often the hardest part! We recorded both the vocalist and the rap vocal – as well as tweaking the production, working closely with Dominic to achieve the final sound he was looking for. After mixing and mastering it in house too, we’re happy to say that the final 10% was found!

Nathan Williams London-based artist and producer Nathan Williams came to us to use our studio space, and Andy’s expertise to help him record and finish his unique sounding project. Beginning with one track, we had the studio full of interesting combinations of musicians and sounds to create his vision. In all, we had a flautist, violin, cello, double bass, drums, djembe as well as keys from Andy and vocals from Nathan. It was a hugely enjoyable project, and great to a the studio full of talented musicians.

Olivia Emmerson Just turned 14, Olivia Emmerson came to us for a four-hour studio session to record some beautiful covers as a gift her father bought for her birthday. We offer studio time vouchers for those wishing to purchase a talented loved one something unique, and Olivia’s father did just that. Despite her young years, and her first time in the studio, Olivia’s professionalism and talent was wonderful, and a real joy to have in the studio. We look forward to having her back as her voice develops. 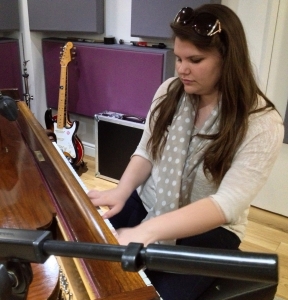 Richard Samson Ex-Drifters singer Richard Sampson brought his shades, bongo drums and backing vocalists to join him in creating his single, Rainfall, with Andy on production. Over two days, the demo was transformed into a club classic, all documented by Richard’s videographer as they filmed the ‘making of’. Looking forward to working with Richard on his next single in the coming months. 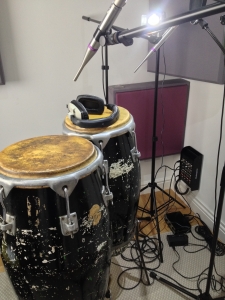 Drums mic’d up in the booth at Greystoke Studio

Toby Mulherrin Munich native Toby Mulherrin travelled to us for a six-day session working on 2 tracks with our production team. His parents originally from the UK, Toby’s lived in Germany his whole life and has been making music for many years.  He worked with Andy picking his two strongest songs from a long list of possible options, and we spent the Easter week perfecting the two and developing Toby’s sound with him. 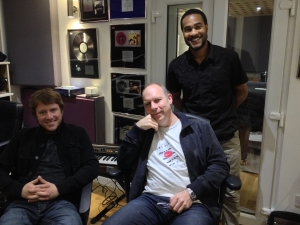 Toby, Andy Whitmore and engineer Nicholas take a break in between recording his two tracks

Stephen Attridge and The Sleeping Giants A writing collective and band formed from talented musicians around Worcester – Attridge’s project came to us for a progressive house remix of the track ‘Ghost’. Having featured on BBC Introducing Radio and playing slots at Wychwood Festival  – we were keen to get our hands on the track and see where we could take it. The production was managed by Andy and Matt – working together to get the perfect sound for Stephen and help him secure more diverse radio and club features on the strength of a great song.

Tambu Christel Pembele Singer and songwriter Tambu is working on a long term project to complete her first album. She’s been taking instrumental demos and working at the studio to write, record and produce with our team. She chose Greystoke for it’s atmosphere and private space, and we even had a surprise visit from her baby daughter – it’s been a pleasure! 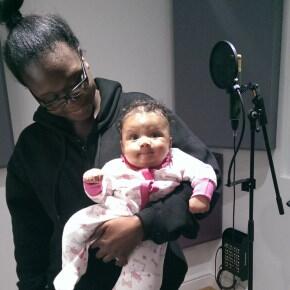 Tambu brings her daughter in for a try on the mic…