Despite festival season being in full swing, Greystoke has been full of artists swapping the sun for sound and holing themselves up with us to make music in our West London recording studio. We’re not complaining  – and there’s always time for a cuppa tea outside on the patio in between vocal takes!

Greystoke Studio is great for recording, but also great for writing. We’ve got all sorts of instruments to get creative on, and a vocal booth that’s always ready to go – and we love to hear music being created. Producer Andy Whitmore worked in succession with a number of Notting Hill talents, writing a number of tracks set for a number of briefs. The all-conquering music publisher, Notting Hill, has had hits world-wide, from chart-topping pop, to K-Pop and J-pop – it’s always exciting to write music for other people and see them succeed.

The writers in question were Claire Rodrigues, Takeru Sasaki, Joe Killington, Berri and Penny Hannant – keep your eyes out for this talented bunch! 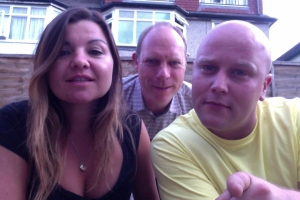 Berri, Andy and Jo catching some patio rays in between takes

Having racked up over 85k plays on their most recent track, Get Your Sexy On, the infectious, cheeky, massive pop sound of Lovestarrs paid a visit to Greystoke for a spot of writing with Andy for their next project. The resulting song we hope to hear  getting some airplay on Soundcloud soon too. Loverstarrs are the Guardian-approved trio from London, Sarah, Hamish and George.  We love their sound here at Greystoke – set for large things we very much suspect too. Lead singer Sarah is a modern writer with a thoroughly modern voice and the result is somewhere between Charlie XCX and Years and Year – take a listen and love it – we do! Check their sound out here;  https://soundcloud.com/planetlovestarr

Lovestarrs – they take their music more seriously than their straws 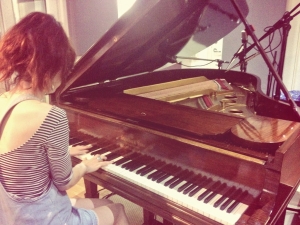 Molly on our beloved Steinway, making it sound wonderful!

Following a spate of radio plays on BBC Introducing on her home-made demos, Molly looked to Greystoke and in-house producer/engineer Chris Langley Smith to help her transform her piano/vocal demos into beautifully crafted songs, complete with live string arrangements, our stunning Steinway and delicately handled additional production. We’re hoping to hear these songs on radio soon – Molly’s an incredible singer and songwriter and an all round wonderful lady. We recommend you look her up! 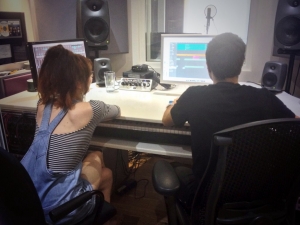 If there’s such a thing as Instagram fame, Eli has it, 5k followers tracking his musical moves;  http://instagram.com/officialeli
Bruno Mars/Drake-esque vocals and a sporting a yellow polo neck in the his second of his sessions – Eli is one cool dude – and also very lovely! We couldn’t get enough of his catchy number, Apes In Suits. Be sure to check him out online and look out for his acoustic performances around London. We worked with him from scratch to write produce the tracks for his song ideas, followed by a second session to perfect his vocals. 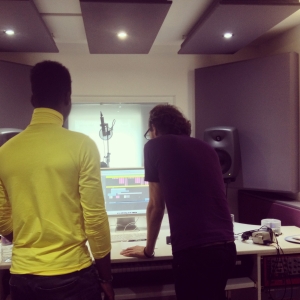 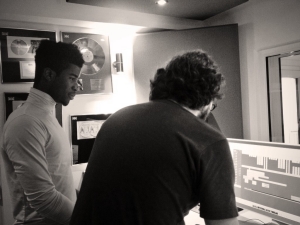 London-based Neil has been writing and working on his EP for a long time, finally choosing to set up camp at Greystoke for three days, and track the whole 5 songs with us in record time. A few follow up mix sessions and we’re pleased to say the entire EP has been recorded, mixed and mastered with us using one of our freelance engineers Anthony Price and in-house mix engineer James Waldron – and it’s been a pleasure. Onions is a talent, and his songwriting and choice of simple yet effective production carries the work. His EP launch is coming soon, so keep a look out! 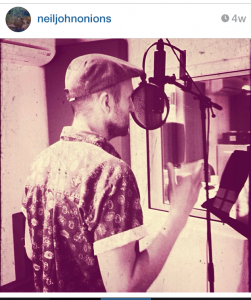 A photo of Onions wot we nicked from Instagram…

Fronted by the biggest voice we’ve had in the studio for a while, Welsh singer Lynsey Pugh, and teamed with Dan York and Paul Brand – Fluid Tune brought their unfinished demo to Greystoke where our team, Andy, Matt Knight and James polished it over two days and produced a club-thumping number. Looking forward to seeing the video! 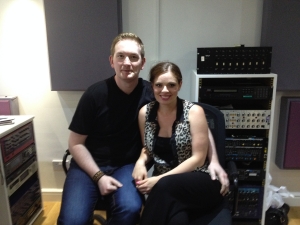 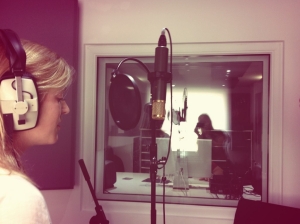 Loving boyfriend Ben Jordan bought studio time at Greystoke for his girlfriend Claire Bolton. Having trained classically when younger, Claire wasn’t a stranger to music but this was her first time in the studio, and the first time she’d ever recorded a song, and it was the first song she’d ever written. We get studio pros, sessions singers and writers in – so to experience someone’s first time in studio is always exciting. A touching acoustic ballad with additional production by our team, it was a really lovely afternoon seeing it come alive and to get Claire’s beautiful voice finally down on record.